In accordance with section 120 of the Coroners and Justice Act 2009, the Sentencing Council issues this definitive guideline. It applies to all offenders aged 18 and older, who are sentenced on or after the effective date of this guideline, regardless of the date of the offence.*

unless the court is satisfied that it would be contrary to the interests of justice to do so.”

This guideline applies only to offenders aged 18 and older. General principles to be considered in the sentencing of children and young people are in the Sentencing Council definitive guideline, Overarching Principles – Sentencing Children and Young People.

*This guideline does not apply to offenders being sentenced for offences committed prior to 4 April 2005. The maximum sentence that applies to an offence is the maximum that applied at the date of the offence.

Community orders can fulfil all of the purposes of sentencing. In particular, they can have the effect of restricting the offender’s liberty while providing punishment in the community, rehabilitation for the offender, and/or ensuring that the offender engages in reparative activities.

A community order must not be imposed unless the offence is ‘serious enough to warrant the making of such an order’.1 Where an offender is being sentenced for a non-imprisonable offence, there is no power to make a community order.2

The court must ensure that the restriction on the offender’s liberty is commensurate with the seriousness of the offence3 and that the requirements imposed are the most suitable for the offender.4

Sentences should not necessarily escalate from one community order range to the next on each sentencing occasion. The decision as to the appropriate range of community order should be based upon the seriousness of the new offence(s) (which will take into account any previous convictions).

Save in exceptional circumstances at least one requirement must be imposed for the purpose of punishment and/or a fine imposed in addition to the community order.5 It is a matter for the court to decide which requirements amount to a punishment in each case.

The seriousness of the offence should be the initial factor in determining which requirements to include in a community order. Offence-specific guidelines refer to three sentencing levels within the community order band based on offence seriousness (low, medium and high).

The culpability and harm present in the offence(s) should be considered to identify which of the three sentencing levels within the community order band (low, medium and high) is appropriate.

See below for non-exhaustive examples of requirements that might be appropriate in each.

At least one requirement MUST be imposed for the purpose of punishment and/or a fine imposed in addition to the community order unless there are exceptional circumstances which relate to the offence or the offender that would make it unjust in all the circumstances to do so.6

A full list of requirements, including those aimed at offender rehabilitation, is given below.

Community orders consist of one or more of the following requirements:

In many cases, a pre-sentence report will be pivotal in helping the court decide whether to impose a community order and, if so, whether particular requirements or combinations of requirements are suitable for an individual offender. Whenever the court reaches the provisional view that a community order may be appropriate, it should request a pre-sentence report (whether written or verbal) unless the court is of the opinion that a report is unnecessary in all the circumstances of the case.

It may be helpful to indicate to the National Probation Service the court’s preliminary opinion as to which of the three sentencing ranges is relevant and the purpose(s) of sentencing that the package of requirements is expected to fulfil. Ideally a pre-sentence report should be completed on the same day to avoid adjourning the case. If an adjournment cannot be avoided, the information should be provided to the National Probation Service in written form and a copy retained on the court file for the benefit of the sentencing court. However, the court must make clear to the offender that all sentencing options remain open including, in appropriate cases, committal for sentence to the Crown Court.

The court must impose an electronic monitoring requirement where it makes a community order with a curfew or exclusion requirement save where:7

The court may impose electronic monitoring in all other cases. Electronic monitoring should be used with the primary purpose of promoting and monitoring compliance with other requirements, in circumstances where the punishment of the offender and/or the need to safeguard the public and prevent re-offending are the most important concerns.

The approach to the imposition of a custodial sentence should be as follows.

Has the custody threshold been passed?

A custodial sentence must not be imposed unless the offence or the combination of the offence and one or more offences associated with it was so serious that neither a fine alone nor a community sentence can be justified for the offence.

There is no general definition of where the custody threshold lies. The circumstances of the individual offence and the factors assessed by offence-specific guidelines will determine whether an offence is so serious that neither a fine alone nor a community sentence can be justified. Where no offence specific guideline is available to determine seriousness, the harm caused by the offence, the culpability of the offender and any previous convictions will be relevant to the assessment.

The clear intention of the threshold test is to reserve prison as a punishment for the most serious offences.

Is it unavoidable that a sentence of imprisonment be imposed?

Passing the custody threshold does not mean that a custodial sentence should be deemed inevitable. Custody should not be imposed where a community order could provide sufficient restriction on an offender’s liberty (by way of punishment) while addressing the rehabilitation of the offender to prevent future crime.

For offenders on the cusp of custody, imprisonment should not be imposed where there would be an impact on dependants which would make a custodial sentence disproportionate to achieving the aims of sentencing.

What is the shortest term commensurate with the seriousness of the offence?

In considering this the court must NOT consider any licence or post sentence supervision requirements which may subsequently be imposed upon the offender’s release.

Can the sentence be suspended?

The following factors should be weighed in considering whether it is possible to suspend the sentence.

The imposition of a custodial sentence is both punishment and a deterrent. To ensure that the overall terms of the suspended sentence are commensurate with offence seriousness, care must be taken to ensure requirements imposed are not excessive. A court wishing to impose onerous or intensive requirements should reconsider whether a community sentence might be more appropriate.

Whenever the court reaches the provisional view that:

Magistrates: Consult your legal adviser before deciding to sentence to custody without a pre-sentence report. 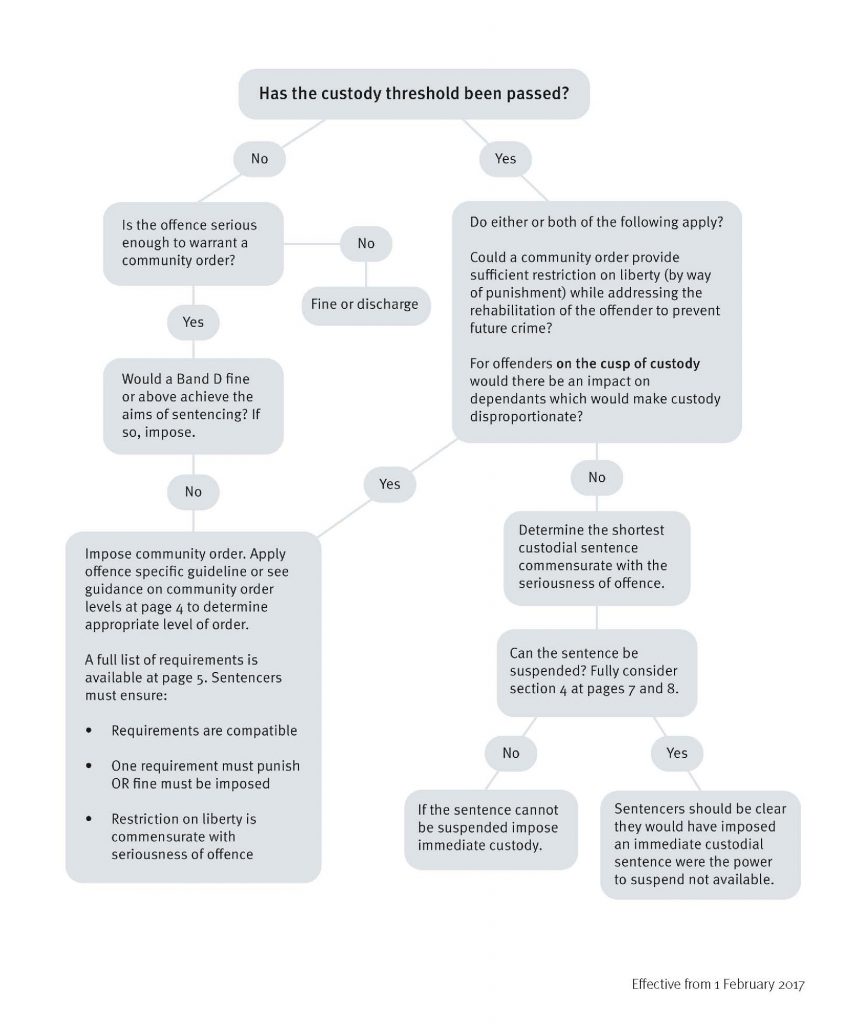 Give feedback about this page

Please tell us if there is an issue with this guideline to do with the accuracy of the content, how easy the guideline is to understand and apply, or accessibility/broken links.

This website uses cookies to improve your experience while you navigate through the website. Out of these, the cookies that are categorized as necessary are stored on your browser as they are essential for the working of basic functionalities of the website. We also use third-party cookies that help us analyze and understand how you use this website. These cookies will be stored in your browser only with your consent. You also have the option to opt-out of these cookies. But opting out of some of these cookies may affect your browsing experience.
Necessary Always Enabled
Necessary cookies are absolutely essential for the website to function properly. This category only includes cookies that ensures basic functionalities and security features of the website. These cookies do not store any personal information.
Non-necessary
Any cookies that may not be particularly necessary for the website to function and is used specifically to collect user personal data via analytics, ads, other embedded contents are termed as non-necessary cookies. It is mandatory to procure user consent prior to running these cookies on your website.
SAVE & ACCEPT