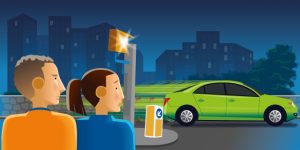 Speeding is classed as an offence under the Road Traffic Regulation Act 1984.

Speed limits help keep people safe. There are different limits depending on the type of road and the type of vehicle. The limit is the maximum speed you can drive at – it does not mean it is safe to drive at this speed in all conditions.

A speed limit of 30 miles per hour (mph) usually applies if there are no road signs indicating otherwise. This is usually the limit in built-up areas where there are likely to be pedestrians around, although it is becoming increasingly common to see 20 mph limits in city streets.

The maximum speed for cars and motorbikes on dual carriageways and motorways is 70 mph.

What happens if a person is caught speeding?

If a person is caught speeding by a speed camera or a police officer they may receive a verbal warning or be asked to attend a speed-awareness course instead of being prosecuted. But this should not be expected.

Usually the registered owner of the car will be sent a Notice of Intended Prosecution (NIP) detailing the offence and a document called a Section 172 notice. This needs to be returned declaring who was driving the car at the time of the offence. Failure to respond to a section 172 notice is an offence.

Once the NIP is returned, a Fixed Penalty Notice (FPN) may be issued to the driver. This is a conditional offer of a fine and penalty points, usually £100, and three licence points.

If the person accepts that they are guilty, they can pay the fine and accept the points.

If the person wants to plead not guilty, they will have to go to court to contest the charge. If the driver is then found guilty in court they may have to pay a higher fine and receive more points or lose their licence.

If the driver has eight or more points on their licence, or they were driving well above the speed limit, they may also have to go to court.

What is the maximum sentence for speeding?

The maximum sentence for speeding on a motorway is £2,500.

The maximum sentence for speeding on any other kind of road is £1,000.

The driver may also receive up to six points or lose their licence.

The fine amount depends on what the speed limit was and how much over the limit the person was driving. It is then calculated as a percentage of the driver’s weekly income.

The fine amount may be decreased if the defendant:

See the sentencing guideline to find out more about how sentences for speeding are worked out.