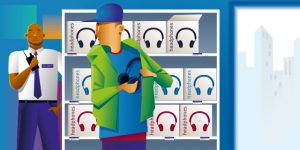 Shoplifting is the term used to describe theft from a shop by taking something without paying for it. It is an offence under the Theft Act 1968. There are slightly different rules for prosecuting what is called “low-value shoplifting” (that is theft from a shop of goods valued at under £200) under the Anti-Social Behaviour, Crime and Policing Act 2014.

There are various reasons a person might shoplift, including:

What happens if a person is caught shoplifting?

A security guard can make a citizen’s arrest if someone is caught in the act of shoplifting and it is not reasonably practical for a police officer to make the arrest instead, for example if the person shoplifting were to run away before a police officer could arrive. Security guards are allowed to use “reasonable” force to detain shoplifters under the Criminal Law Act 1967.

Ultimately, a person caught shoplifting may be arrested and put on trial.

A shoplifting conviction will result in a criminal record and a sentence. A police caution may be given as an alternative to prosecution. If accepted, this caution still comes with a criminal record.

What is the maximum sentence for theft?

If the goods are worth less than £200, the maximum sentence is six months’ custody.

If the goods are worth more than £200, the maximum sentence is seven years’ custody.

Sentences are calculated by an assessment of culpability and harm.

Culpability is a measure of how involved the offender was in the offence, the extent to which it was planned and the sophistication of the shoplifting.

Harm is assessed by the financial loss resulting from the shoplifting and any additional harm suffered by the shop/stall or anyone else. It includes damage to property and the effect on business.

The offender is more likely to receive a custodial sentence if:

If the defendant pleads guilty, they will also receive a reduced sentence.

See the sentencing guideine to find out more about how sentences for shoplifting are worked out.