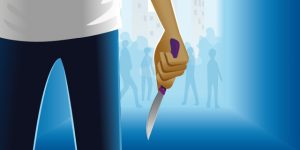 Offences related to carrying knives and other offensive weapons are set out in the Criminal Justice Act 1988 and the Prevention of Crime act 1953.

There are two broad categories of offence: possessing a weapon and threatening with a weapon. The specific offence will depend on the type of weapon used and where the offence was committed.

There are separate but similar offences for knives and offensive weapons. An offensive weapon is anything made or adapted to cause injury, or intended to be used as a weapon, including disguised weapons. Examples include:

A knife is covered by these offences if it has a blade or point (including a folding pocket knife, if the blade is longer than three inches).

Possession of knives and offensive weapons encourages violence and can lead to serious injury and death, as well as facilitating other criminal offences. It is, therefore, an offence to carry a knife or an offensive weapon in a public place, even if the person carrying it claims they were not intending to use it. A person will not be convicted if the knife or weapon was carried for a lawful reason. An example could be someone who uses a knife for work, carrying it on their way to or from work. But carrying a knife or other weapon for protection is not a lawful reason.

A public place is anywhere the public has access to. Roads, schools, hospitals, football stadiums, pubs and shops are all public places.

Threatening with a weapon is a more serious offence. This is where a weapon is used to cause another person to fear that violence may be used against them.

How the courts sentence offenders depends on the type of offence.

Possessing a weapon: the maximum sentence for possession offences is four years’ custody.

If the offender has committed the same offence before or another relevant offence such as threatening with an offensive weapon in a public place, they will face a minimum sentence of at least six months’ custody.

Sentences are calculated by an assessment of culpability and harm, as well as considering any aggravating or mitigating factors.

Culpability means how responsible the offender was for the offence. The court will also consider the kind of weapon they had in their possession.

Harm is a measure of damage caused or risked to the victim or victims. If the offence took place in a prison, school or other place where vulnerable people are likely to be present this would indicate a greater level of harm. Causing serious alarm or distress also indicates greater harm.

Aggravating factors may increase the severity of the sentence. Examples include where the offence was:

Mitigating factors may decrease the severity of the sentence. Examples include where the offender:

If the defendant enters a guilty plea, they will also receive a reduced sentence.

You can find out more about how sentences for knives and offensive weapons are calculated depending on the offence type. See the sentencing guidelines for:

The information on this page is not a complete legal analysis of the offences and is not a substitute for legal advice.  The law will be different in Scotland and Northern Ireland.