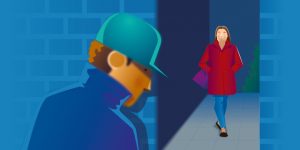 Harassment and stalking are classed as offences under the Protection from Harassment Act 1997 and (where the offending is racially or religiously aggravated) the Crime and Disorder Act 1998. Both offences relate to behaviour that is repeated and unwanted.

Harassment is behaviour intended to cause a person alarm or distress. The behaviour must occur on more than one occasion but it does not have the be the same kind of behaviour on each occasion. Common harassment incidents include:

Harassment involving putting people in fear of violence is a more serious offence. It involves two or more harassment incidents that leave the victim fearing that violence will be used against them.

Stalking involves persistently following someone. It does not necessarily mean following them in person and can include watching, spying or forcing contact with the victim through any means, including through social media.

Stalking involving fear of violence or serious alarm or distress is a more serious offence. It involves two or more occasions that have caused the victim to fear violence will be used against them or had a substantial adverse effect on their day-to-day activities, even where the fear is not explicitly of violence. Evidence that the stalking has caused this level of fear could include the victim:

For both harassment and stalking, the offence is more serious if it is racially or religiously motivated, that is carried out because of someone’s racial or ethnic origin or their religion or lack of religion.

What is the maximum sentence for harassment or stalking?

If the offence is harassment or stalking:

Sentences are calculated by an assessment of culpability and harm.

Harm is a measure of the distress caused to the victim as a result of the harassment or stalking. This could be evidenced by the victim having to make considerable changes to their lifestyle.

Mitigating factors may decrease the severity of the sentence. Examples include where the offender:

If the defendant pleads guilty, they will also receive a reduced sentence.

You can find out more about how sentences for harassment and stalking are calculated depending on the offence type. See the sentencing guidelines for: