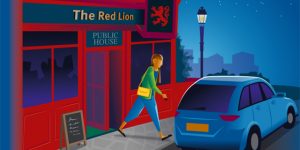 The legal alcohol limit for drivers in Scotland is lower in all three categories.

What happens if a person is caught drink driving?

The police have the right to ask anyone who is driving, attempting to drive or in charge of a vehicle who they suspect has been drinking to take a breath test. Anyone who refuses to supply a breath sample without reasonable excuse will be arrested. If a person fails the breath test they will be taken to a police station for a second breath test. If that returns a positive result, that person will be charged with drink driving. Failing to take the roadside test or police station test without reasonable excuse is an offence.

Anyone caught over the limit in their car, even if they are not actually driving it, could still be charged under excess alcohol (in charge).

What is the penalty for drink driving?

If a person is found guilty of drink driving they could be banned from driving, fined or even sent to prison. The sentence depends on the severity of the offence and is decided by a magistrates’ court.

The maximum sentence for excess alcohol (drive/ attempt to drive) is an unlimited fine and/or six months’ custody.

If the offence was drive/ attempt to drive, the driver will also lose their licence for at least 12 months. The court may offer a reduced ban if the driver completes a drink-drive rehabilitation scheme (DDRS) course.

If the offence was excess alcohol (in charge), the maximum sentence is a fine up to £2,500 and/ or three months’ custody.  The offender may lose their licence or receive 10 points.

Sentences are based on the level of alcohol found from testing. The court also considers adjustment based on any aggravating or mitigating factors.

Mitigating factors may reduce the severity of the sentence. Examples include:

If the defendant pleads guilty, they will also receive a reduced sentence, although not a reduced disqualification period.

You can find out more about how sentences for drink driving are calculated depending on the offence type. See the sentencing guidelines for: